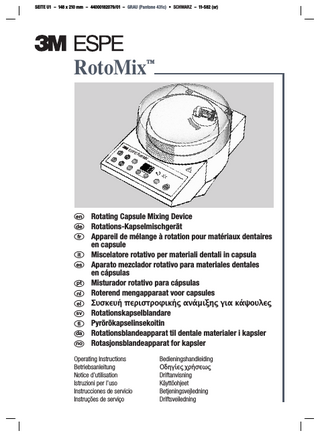 9. Return of Old Electric and Electronic Equipment for Disposal 9.1 Collection 9.2 Return and Collection Systems 9.3 Meaning of the Symbols

CAUTION! Please read these instructions carefully before you set up and start the device. As with all technical equipment, this unit will function properly and be safe to operate only if both the general safety regulations and the specific safety instructions laid out in these Operating Instructions are followed. 1. The unit must be operated in accordance with the following instructions. We accept no liability for any damage arising from use of the unit for any other purpose. 2. Prior to setting-up the device, ensure that the voltage stated on the rating plate is identical to the available main voltage. Use of the device at different voltages may lead to the destruction of the unit. 3. The unit must be operated with the cover intact and closed, otherwise, there is a risk of injury. 4. The cover must not be opened until the capsule holder has come to a complete stop. 5. Only the capsule to be mixed but no other objects may be present in the space below the cover prior to initiating the mixing cycle. 6. Placement or operation of the unit on non-level surfaces is not permissible. 7. Transferring the unit from a low to a higher ambient temperature, there may be a hazard due to condensation of water on the device. Hence, the unit should only be operated once it is fully equilibrated with the ambient temperature. 8. For operation of the unit, connect the main plug to an adequate electrical socket with grounded lead. If an extension cable is used, ensure that the grounded lead is not interrupted. 9. In order to prevent electrical shock hazards do not insert any objects into the unit with the exception of replacement parts properly installed in accordance with the present instructions. 10. If there is any reason to believe that the safety of the device may be compromised the unit must be taken out of operation and labelled appropriately to ensure the device is not inadvertently used by another person. The safety may be compromised, for example, when the unit fails to function properly or shows visible signs of damage. 11. The device should be opened and repairs be carried out only by qualified personnel. 12. Only adequately labelled original 3M ESPE replacement parts may be used in the repair and maintenance of this unit. Any damage resulting from the use of third-party replacement parts voids the liability of 3M Deutschland GmbH. 13. Do not attempt to operate this unit by bypassing the protective mechanisms (e.g. by turning off the automatic shut-off switch on the cover of the unit). Violation of the safety regulations may cause serious injury and voids all warranties and guarantees.

14. Do not expose the device to solvents, flammable liquids, and strong heat sources as these may damage the plastic housing. 15. Cleaning the unit, ensure that no cleaning agent enters the device since this may lead to electric short circuiting or hazardous malfunctions. 16. Pay attention to capsule leak tightness when mixing. Capsules that are not leak tight contaminate the device with mercury. Contaminated devices cannot be repaired and must be disposed of as contaminated waste according to local laws. See the safety data sheet for the amalgam used for first aid, measures to take in case of unintended release, handling, storage, exposure limitation, and personal protective clothing.

The RotoMix unit is a mixing device for dental filling materials and cements in capsules. Unlike conventional capsule mixers, the device uses a rotating motion which is faster and more efficient and leads to improved homogeneity of the mixed pastes. In addition, RotoMix offers the option to centrifuge the capsules after mixing. Depending on the viscosity this procedure may reduce air bubbles in the material. Desired mixing and centrifugation times may be programmed into the mixing programmes “P1”-“P4”. Moreover, two pre-set mixing times, “10s” and “8s”, can be selected.

Prior to the first start-up remove the transport safeguard (foam ring) and instruction card. Connect the RotoMix unit to the power supply and switch on the unit with the power switch on the back of the device. The display shows the mixing time of programme 1.

Operating Instructions should not be discarded for the duration of product use.

Do not operate the device with no capsule inserted!

Do not use capsules weighing more than 6 g (Error message “Lo” is displayed). 5.2 Mixing

4.1 Setting the operating mode With the key “Mode” the user may toggle between the two available operating mode options. If only the “ ” symbol is illuminated, the device mixes without centrifugation. If both the “ ” and “ ” symbols are illuminated, the device mixes and then centrifuges the sample for 3 sec. 4.2 Setting the mixing time Mixing times in the range of 1 sec to 39 sec may be selected. By pressing the keys, “+” or “-”, the device increases or decreases, respectively, the mixing time by 1 sec. Depressing and holding the key, the device continues to count up or down. 4.3 Changing the basic settings P1 - P4 Set both the mixing time and operating mode as described above, then depress one of the programme buttons, “P1”-“P4”, until two short signals are issued. This confirms that the desired settings have been stored in the selected programme. 10s / 8s The two fixed mixing times of “10s” and “8s” can be programmed to be used both with and without centrifugation. As described above, select an operating mode with or without centrifugation, and depress and hold the desired fixed time button until two short signals are issued.

After closing the protective cover press the “Start/Stop”button. This starts-up the mixing process. The mixing time and centrifugation time, if any, are counted down in the time display. After the mixing time has elapsed, the latest time setting is re-displayed so that there is no need to re-enter any value if the same time is to be used. The selected programme can be interrupted at any time by pressing the “Start/Stop”-button, upon which the program returns to its original setting. CAUTION: For safety reasons, it is not feasible to start the unit unless the cover is closed. Attempting to operate the unit with the cover being open causes the time display to flash and an audible error message to be issued. Opening of the protective cover during mixing is associated with a high risk of injury. Hence, the mixing process is aborted and the error message “Lo” displayed. This may render the capsule useless! Therefore, never open the cover until the mixing process is completed and the capsule holder has come to a complete stop! 5.3 Removal of the capsule Open the capsule holder with a counter-clockwise rotation, and remove the capsule.

6. Notes Due to the more efficient mixing achieved with the rotating RotoMix device, mixing times have to be reduced compared to other mixing devices. The following settings are suitable for 3M ESPE capsule materials: Previous mixing time with the CapMix™ device:

Capsule materials of third-party manufacturers (including amalgam capsules) may be processed with the RotoMix device provided they are suitable for the device in terms of weight and dimensions (please refer to the section, Technical Data). The optimal mixing time for processing with the RotoMix device should be inquired from the manufacturer of the capsule. Pay attention to capsule leak tightness when mixing. Capsules that are not leak tight contaminate the device with mercury (please refer to 1. Safety, 16.).

Capsule is thrown out of the holder

Capsule is too heavy

8. Maintenance and Care The device requires no maintenance. Clean all components with a soft cloth and, if necessary, a mild cleaning agent (e.g. dish-washing detergent). Solvents or abrasive cleaners may not be used in any case, as they can damage the plastic components! - Cleaning agents must not enter the unit! To disinfect all components, spray the disinfectant on a towel and use it to disinfect the unit. Do not spray the disinfectant directly on the device. - Disinfectant agents must not enter the unit! - Dry residual disinfectants on the device with a soft and fluff-free cloth, as they damage the plastic components. If necessary, ask the manufacturer of the disinfectant if its constant use will damage plastic surfaces.

9. Return of Old Electric and Electronic Equipment for Disposal 9.1 Collection Users of electric and electronic equipment are required to collect their old equipment separately from other waste in accordance with the regulations of the specific country. Old electric and electronic equipment must not be disposed of with unsorted household waste. This separate collection is a prerequisite for recycling and reprocessing as an important method for preserving environmental resources. 9.2 Return and Collection Systems When your RotoMix is no longer usable, do not dispose of the device with household waste. 3M Deutschland GmbH has set up special disposal facilities to handle the equipment. Details about the procedure for the specific country can be obtained from the pertinent 3M subsidiary.

9.3 Meaning of the Symbols The EU Directive prohibits the disposal of any electric or electronic devices marked with these symbols in combination with household waste.

10. Customer Information No person is authorized to provide any information which deviates from the information provided in this instruction sheet. 10.1 Warranty 3M Deutschland GmbH warrants this product will be free from defects in material and manufacture. 3M Deutschland GmbH MAKES NO OTHER WARRANTIES INCLUDING ANY IMPLIED WARRANTY OF MERCHANTABILITY OR FITNESS FOR A PARTICULAR PURPOSE. User is responsible for determining the suitability of the product for user’s application. If this product is defective within the warranty period, your exclusive remedy and 3M Deutschland GmbH’s sole obligation shall be repair or replacement of the 3M Deutschland GmbH product. 10.2 Limitation of Liability Except where prohibited by law, 3M Deutschland GmbH will not be liable for any loss or damage arising from this product, whether direct, indirect, special, incidental or consequential, regardless of the theory asserted, including warranty, contract, negligence or strict liability.

Information valid as of December 2011