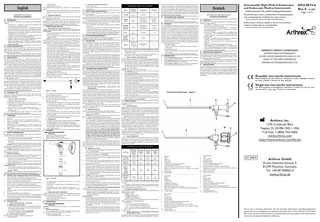 Minutes or until visibly

P. STERILIZATION Sterilization is to be performed following cleaning, disinfection, and sterile packaging prior to use. I. STERILE PACKAGING Singly: Single devices should be packed as to ensure that the pack is large enough to contain the device without stressing the seals. Packaging should be completed utilizing a pouch or wrap which conforms to the recommended specifications for steam sterilization as outlined below. If a wrap is utilized, it should be completed following AAMI double-wrap or equivalent guidelines with an appropriate wrap (cleared by the FDA or the local governing body). Sets: Where appropriate, cleaned, disinfected and inspected devices should be placed into trays/cases as provided or in general-purpose sterilization trays. The total weight of trays/cases should not exceed 11.4 kg/25 lbs. (other local limits below 11.4 kg/25 lbs. may apply). Trays/cases should be double wrapped following AAMI or equivalent guidelines with an appropriate wrap (cleared by the FDA or the local governing body). Sets may also be placed into an approved reusable rigid sterilization container. Aesculap SterilContainer™ and Genesis® rigid containers with perforated bottoms and lids are approved for use with Arthrex, Inc. sets. Areas, or bracketed positions, designated for specific devices shall contain only devices intended for those areas. Devices should not be stacked or placed in close contact. Only Arthrex devices should be included in the trays or cases. These validated instructions are not applicable to trays or cases that include devices not intended to be used with Arthrex trays or cases. II. STEAM STERILIZATION Local or national specifications should be followed where steam sterilization requirements are stricter or more conservative than those listed in the table below. Sterilizers vary in design and performance characteristics. Cycle parameters and the load configuration should always be verified against the sterilizer manufacturer’s instructions.

The agents for transmission of Creutzfeldt-Jakob disease (CJD) are believed to be resistant to normal processes of disinfection and sterilization and therefore the normal processing methods of decontamination and sterilization as described above may not be appropriate where CJD transmission is a risk. In general, the tissues that come into contact with orthopedic surgical instruments are those of low TSE infectivity. However, particular precautions should be taken when handling instruments that have been used on known, suspected, or at-risk patients. Refer to ANSI/AAMI ST79 for further information. Q. PACKAGING AND LABELING 1. Arthrex devices should be accepted only if the factory packaging and labeling arrive intact. 2. Contact Customer Service if the package has been opened or altered. R. STORAGE Non-sterile metal devices should be stored in a clean, dry environment. The shelf life of non-sterile devices is not limited; the devices are manufactured from nondegradable material, which does not raise any question of device stability when stored under recommended conditions. It is the responsibility of the end-user to ensure devices, once sterilized, are stored in such a way as to maintain the sterility of the device until use. Sterile, packaged devices should be stored in a designated, limited access area that is well ventilated and provides protection from dust, moisture, insects, and temperature/humidity extremes. Sterile device packages should be carefully examined prior to opening to ensure that package integrity has not been compromised. Maintenance of sterile package integrity is generally event related. If a sterile wrap is torn, shows any evidence of tampering, or has been exposed to moisture, the device or set must be cleaned, repackaged, and sterilized. Additional storage requirements: • Avoid direct sunlight. • Ensure that the endoscope and endoscopic medical instruments are stored securely. Storage between processing: • Verify that the endoscope is disassembled from the illumination fiber and the camera. • Ensure all adapters, if used, are disassembled from the endoscope. S. INFORMATION 1. In CE Accepting Countries: Procedures carried out using these devices may be used on the general population. 2. In CE Accepting Countries: The clinical benefits associated with the use of these devices outweigh the known clinical risks. 3. In CE Accepting Countries: There are no identified residual risks or uncertainties associated with the clinical use of these devices.