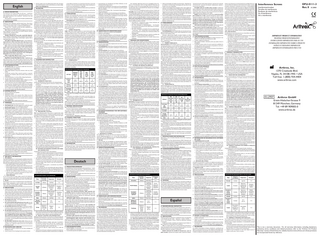 Minimum 6 Minutes or until visibly dry

1Drying times vary according to load size and should be increased for larger loads. 2Cooling times vary according to the sterilizer used, device design, temperature and humidity of ambient environment, and type of packaging used. Cooling process should comply with AAMI ST79. 3Reprocessing parameters recommended by the World Health Organization (WHO) where there is concern regarding TSE/CJD contamination. Note: Immediate-use (flash) steam sterilization should only be used as an emergency procedure. Refer to AAMI ST79 for further instructions and limitations.

L. MATERIAL SPECIFICATIONS Refer to the package label for the materials. The device is made of titanium, polyetheretherketone (PEEK), polypropylene or poly (L-Lactide). Bio-composite devices are made of made of various configurations of polymers including poly (L-lactide), poly (L, DL-lactide; PLDLA), biphasic calcium phosphate, biphasic tricalcium phosphate (TCP) and hydroxyapatite (HA). Sheath (if present): Polypropylene, silicone dam