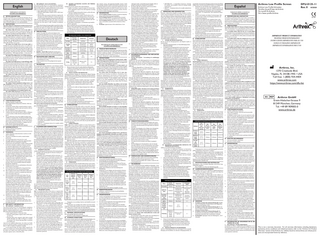 III. MACHINE (AUTOMATED) CLEANING AND THERMAL DISINFECTION Considerations for the selection of the washer-disinfector: • Capable of providing an approved program for thermal disinfection (appropriate exposure time and temperature according to A0 concept) • Final rinse completed with purified (critical, e.g. RO or DI) water, and utilizes only filtered air for drying 1. After preliminary cleaning is complete, load the devices in the washer-disinfector such that all design features of the device are accessible to cleaning and such that design features that might retain liquid can drain (for example, hinges should be open and cannulations/holes positioned to drain). 2. If using alkaline cleaning agents, a neutralization step should be utilized as appropriate. 3. Run an automated wash cycle with fundamentally approved efficiency of the washer-disinfector (for example, CE marking according to EN ISO 15883 or FDA approval/clearance/registration). The following minimum recommended automated wash cycle parameters were utilized by Arthrex during the validation of these instructions.

1Drying times vary according to load size and should be increased for larger loads. 2Cooling times vary according to the sterilizer used, device design, temperature and humidity of ambient environment, and type of packaging used. Cooling process should comply with ANSI/AAMI ST79. 3Reprocessing parameters recommended by the World Health Organization (WHO) where there is concern regarding TSE/CJD contamination. L. MATERIAL SPECIFICATIONS Refer to the package label for the materials. This device is made of titanium or stainless steel. M. STORAGE CONDITIONS Sterile devices must be stored in the original unopened packaging, away from moisture and should not be used after the expiration date. Non-sterile metal devices should be stored in a clean, dry environment. The shelf life of non-sterile devices is not limited; the devices are manufactured from non-degradable material, which does not raise any question of device stability when stored under recommended conditions. It is the responsibility of the end-user to ensure devices, once sterilized, are stored in such a way as to maintain the sterility of the device until use. Sterile, packaged devices should be stored in a designated, limited access area that is well ventilated and provides protection from