Suture Buttons Directions for Use 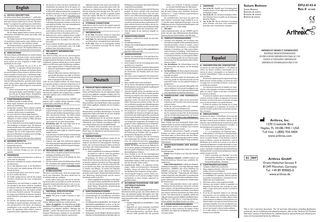 9. Any decision to remove the device should take into consideration the potential risk to the patient of a second surgical procedure. Device removal should

be followed by adequate postoperative management.

10. Detailed instructions on the use and limitations of

this device, the patient leaflet (www.arthrex.com/

The Arthrex Suture Button, BicepsButton™, and Pec But- patientleaflets) and the patient implant card should

ton are comprised of metal buttons which may be provided be given to the patient. Your surgeon will guide you

with suture and pre-loaded onto an inserter. The Retro- in deciding what particular treatment is best for you

Button® is comprised of a graft loop and a metal button.

and explain the benefits, risks, and contraindications

of a metal button, suture with a straight needle, button 11. This is a single use device. Reuse of this device could

result in failure of the device to perform as intended

The Pec Repair Implant Delivery Systems consist of and could cause harm to the patient and/or user.

and contaminated surgical equipment, should be

needle with a nitinol loop, and a shoehorn cannula. 13. Serious incidents should be reported to Arthrex Inc.,

The Tenodesis Button is comprised of a metal button or an in-country representative, and to the health

pre-loaded onto an inserter. The Tenodesis Button may authority where the incident occurred.

be provided with suture and disposable instrumentation.

of bone to bone or soft tissue to bone, and are intended simulations demonstrated that the Suture Buttons

as fixation posts, a distribution bridge, or for distributing manufactured from Titanium or Stainless Steel are MR

suture tension over areas of ligament or tendon repair. Conditional. A patient with this device can be scanned

safely in an MR system under the following conditions:

FiberWire® or equivalent with the Suture button.

are used for fixation of bone to bone or soft tissue to bone, • Maximum MR system reported, whole body aver-

and are intended as fixation posts, a distribution bridge,

or for distributing suture tension over areas of ligament

15 minutes of scanning in the Normal Operating

or tendon repair in the shoulder and elbow and may in-

Mode of operation for the MR system

major), biceps tendon repair and reattachment (distal/ are expected to produce a maximum temperature rise of

proximal), and ulnar collateral ligament reconstruction up to ≤2.5˚C after 15-minutes of continuous scanning.

In non-clinical testing, the image artifact caused by

the Large Pec Button, and #2 FiberWire or equiva- mm from this implant when imaged using a gradient

Arthrex Suture manufactured from UHMWPE and

1. Insufficient quantity or quality of bone.

polyester with or without silicone elastomer coating,

which may retard healing.

3. Foreign-body sensitivity. Where material sensitivity 1. Surgeons are advised to review the product-specific

is suspected, appropriate tests should be made and surgical technique prior to performing any surgery.

sensitivity ruled out prior to implantation.

during the healing period.

representative for an onsite demonstration.

6. The use of this device may not be suitable for patients 2. RetroButton only: The loop length must be ad-

with insufficient or immature bone. The physician equate for the button to exit the cortex.

should carefully assess bone quality before perform- 3. RetroButton only: Measurements of intraosse-

immature. The use of this medical device and the implant selection.

placement of hardware or implants must not bridge, 4. Loop and button should be properly oriented during

disturb or disrupt the growth plate.

passing and fixation, per technique guide, in order

7. Do not use for surgeries other than those indicated. to function properly.

5. Surgeons must apply their professional judgment

1. Infections, both deep and superficial.

when determining the appropriate plate size based on

3. Allergies and other reactions to device materials.

4. Silicone sensitivity, though very rare, has been H. PACKAGING AND LABELING

1. Arthrex devices should be accepted only if the factory

1. Caution: Federal law restricts this device to sale by or 2. Contact Customer Service if the package has been

on the order of a physician

2. This device is intended to be used by a trained medi- 3. All of the symbols used on the labeling along with the

3. Do not add additional suture to the RetroButton. may be found on our website at www.arthrex.com/

The extra suture may impede passage of the device symbolsglossary.

4. An internal fixation device must never be reused. This device is provided sterile. Check the package label-

5. Do not re-sterilize this device.

ing for more information. This device should never be

6. All metallic implant devices used for this surgical re-sterilized under any conditions.

ing this procedure are provided non-sterile and must be

7. Postoperatively and until healing is complete, fixa- adequately cleaned and sterilized prior to use or re-use.

as temporary and may not withstand weight bearing specific information.

or other unsupported stress. The fixation provided

by this device should be protected. The postopera- J. MATERIAL SPECIFICATIONS

tive regimen prescribed by the physician should be Refer to the package label for the materials.

Button: This device is made of titanium or stain-

8. Pre-operative and operating procedures, including

knowledge of surgical techniques and proper selec- coating. Additional material may include polyester.

tion and placement of the device, are important

considerations in the successful utilization of this Polyethylene (UHMWPE) braid, or a polyblend of UHWMPE

required for proper implantation of the device.

TigerTape™ sutures). The sutures meet or exceed U.S. and

surgical sutures (except for diameter requirements).

and ease of passing suture through tissue. The suture is geeignet, bei denen entweder nicht ausreichend

are made of nylon.

Sterile devices must be stored in the original unopened

packaging, away from moisture and should not be used

after the expiration date.

1. In EU Only: Procedures carried out using these

devices may be used on the general population. D. NEBENWIRKUNGEN

use of these devices outweigh the known clinical risks.

3. In EU Only: There are no unacceptable residual 2. Fremdkörperreaktionen.

use of these devices.

12. I rifiuti a rischio biologico, come i dispositivi espianta- diametro).