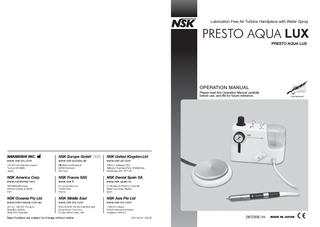 OPERATION MANUAL Please read this Operation Manual carefully before use, and file for future reference.

Cautions for handling and operation

Read these safety cautions thoroughly before use and operate the product properly. These indicators are to allow you to use the product safely, prevent danger and harm to you and others. These are classified by degree of danger, damage and seriousness. All indicators concern safety, be sure to follow them. 9

Degree of Danger or Danger and Seriousness

Explains an instruction where personal injury or physical damage may occur.

Explains an instruction where minor to medium injury or physical damage may occur.

Explains an instruction that should be observed for safety reasons.

CAUTION • PRESTO AQUA LUX is a handpiece used in dental laboratories for cutting without heat generation when performing fine work on porcelain teeth, porcelain, and ceramics. Do not use for other applications. • Do not modify or disassemble as performance and safety may be seriously affected. Contact your dealer for repairs and/or service. • Take care not to drop the handpiece or Control Unit. Make sure the unit is situated on a flat and stable surface. • Observe the permissible bur speeds as recommended by the manufacturer. Failure to do so may result in damage or injury. • Do not use oscillating, bent, worn or damaged burs as they may fracture and cause injury. • Do not turn the Chuck Release Ring whilst the handpiece is running as this may damage the mechanism. • Never lubricate the handpiece, it uses a grease filled bearing and additional lubrication may cause damage. • Pay careful attention to rattling, vibration, noise and heat. Check for any irregularities by running handpiece before use. Contact your dealer immediately if any abnormalities are noticed • The optimum air pressure is 0.25~0.3MPa. Using higher pressure may cause excessive rotation speeds leading to premature bearing failure. • Remove any water or debris found in the filter of the Control Unit. • Always use clean, dry burs. Contamination, deposits or debris in the chuck can lead to failure of the mechanism. • Insert bur even when handpiece is not in use. • User is responsible for operation, maintenance and safety. • Do not wash, wipe or submerge the handpiece in any highly acidic or corrosive liquids. • Do not use this Control Unit or turbine in the room of the farmable gas. • Do not use this Control Unit around the equipment that the remarkably electric noise occurs. It may cause a malfunction or breakdown. • Install the Control Unit that cutting oil or water do not hang in it. It may cause malfunction or short circuit. • Wear protection glass, glove, ear piece and dust mask for your safety. • Place equipment so that the power supply cord can be swiftly pulled out in case of emergency. • Do not disassemble or alter the product by yourself. • Be careful not to be injured by the grinder or bur. • Be sure to turn the power off before cleaning and maintenance of the handpiece.

NOTICE • Do not power off the Control Unit until turbine is completely stopped. • Only use with original power supply cord. In case of damage, contact NSK / Nakanishi service center. • Equipment to be sent back to maufacturer for servicing / repair.

Thank you for purchasing the PRESTO AQUA LUX. Please read this operating manual carefully, and file for future reference.

3. Installation Procedures for Each Part (1) Installation Procedures for Each Part Push the plumbing hose into the Plumbing Connector located at the regulator on the left-hand side of the Control Unit. Connect Plumbing Hose and Control Unit as shown in Fig.1. Check if the hose is securely installed by slightly tugging it after connection. Connect the other end of the plumbing hose to the air line. At this time, use the attached connector if necessary.

• Push the plumbing hose into the connector until it is securely set. Otherwise, air may leak. • Pushing the white ring, on the plumbing connector, gently remove the tube.

<Installation> Press the Bottle Attaching/Detaching release button on the back of the Control Unit until it engages and is locked. (Fig. 6) Insert the Water Supply Bottle from above and push downwards until the Bottle Attaching/Detaching release button returns to its original position. Check to see if the water supply bottle is securely held in place pull it upwards.

Connect to compressed air supply air and adjust to 0.3MPa by pulling the Chip Air Adjustment Knob upward and turn in the desired direction. When adjusted correctly push the knob down to lock.

Depending on the water supply you must set the Water ON/OFF switch in the correct position by pulling outwards or pushing inwards. <Use of Water Supply Bottle> Push the Water Mode Select Switch inwards until it stops. (Fig.11).

Use of Water Supply Bottle

<Use of Tap Water> Pull the Water Mode Select Switch outwards until it stops. (Fig. 11) Open the main cock of the tap water.

Use of Tap Water

CAUTION Properly set the Water Mode Select Switch in the ON/OFF position. If the switch is not in the correct position air may enter the system.

(3) Operation Depressing the Foot Control starts operation. If the Water ON/OFF switch is set to the ON side, water supply is also started. Bleeder Button

Check the amount of water and adjust the volume with the Water Adjustment Knob.

(7) Installation and Removal of Water Filter Set (Use of Main Water) Push the hose of the water filter set (the end with the water filter) into the tap water connector on the back of the Control Unit until it is securely held in place as shown in Fig. 10. Check if the hose is securely held in place by slightly tugging it after connection. Connect the other end of the hose to the tap water line.

• When Tap water is used, the water pressure may differ depending on the location, resulting in varying water supply; therefore adjustments may be necessary. • Leaving this product for a long time after using it with fine water mist may cause air ingress in the handpiece hose. This could result in a slow down the water flow when starting up the handpiece. In this case, turn the water volume up fully to clear the line and reduce again as necessary.

Check the spray condition and adjust the amount of Chip Air with the Chip Air Adjustment Knob. Increasing the chip air results in water turning from jet to spray and finally to fine mist. Decreasing the Chip Air has the reverse effect.

(6) LED ON/OFF LED switch is turned ‘ON’ it will illuminate once the Foot Control is depressed.

CAUTION To disconnect push the white ring on the water connector towards the control unit and gently pull the tube out of the connector. 6

Check the LED light condition and adjust the amount of light with the LED Light Adjustmen Knob.

(8) After Operation After completion of operation always close the main air cock. 7

5. Operational Procedures of Handpiece (1) The chuck of the PRESTO AQUA LUX handpiece is a push-in chuck. Align FG burs with ø1.6mm shaft diameter with chuck and push in as shown in Fig.12 Push the bur in by using the designated bur-inserting tool as shown in Fig.13.

7. Replacement or Cleaning Procedures of Chuck (1) Removal of Chuck Rotor

1) Remove the cartridge with a bur or bur blank.

(2) To remove the bur turns the Chuck Release Ring in the direction of the arrow in Fig.14.

2) Hold the rotor with two fingers. (Fig.18) Mount the Wrench provided on the Rotor Nut located on the top of the rotor shaft and turn counterclockwise (either side of the wrench can be used.)

3) When the Rotor Nut is loose, push out the chuck carefully with the Test Bur or the shank of the bur from the back of the cartridge, the Guide Bush and the chuck will come out. (Fig. 19)

The Guide Bush is a very small part and can easily be lost. Please pay attention.

(1) Loosen the cartridge retainer by turning it in the direction shown in Fig.15.

• To clean the chuck places it in an ultrasonic bath. Blow oil spray into the inside of the rotor shaft and clean thoroughly.

(2) Hold the bur and pull to take out the cartridge toward the front. (Fig.16) At this time, the O-ring placed on therear bearing may remain in the body. Make sure to remove the O-ring. Before inserting a new cartridge, clean the head interior.

NOTICE Remove the chuck and clean once a week.

(3) When fitting a new cartridge, align the water and chip air pipes as well as the positioning pin with the holes in the nose hood of the cartridge and push in straight. (Fig.17)

1) Apply oil thinly on the surface of the chuck, insert the Test Bur and push into the rotor shaft. (Fig.20) 2) Insert straight long side of Guide Bush toward the Cartridge side. (Fig. 21)

Do ensure care when handeling the dissambled handpiece, Fiber Optic an easaly dammage.

3) Finally insert the Rotor Nut along the Test Bur and firmly tighten it with the Chuck Wrench while holding the rotor. (Fig.22)

(2) Changing O-ring (Use of Water Supply Bottle) Remove the two O-rings at the Bottle Joint with a pointed tool and insert new O-rings into the grooves. (Fig. 24).

Assemble the Water Fillter in the correct direction as shown in Fig.26. Water Filter Control Unit side