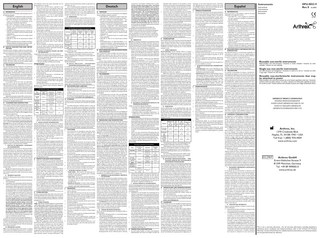 and sterilization. Devices that require disassembly are to be disassembled prior to cleaning. 1. Remove excess soil from devices, especially in areas such as joints and crevices, by cleaning the surfaces with a sponge or brush under cold running water or with a non-shedding disposable wipe for a minimum of 1 minute. 2. Rinse the devices at least 1 minute under running utility water (temperature < 35 °C/95 °F). Special attention should be given to lumens, joint, crevices, and other hard-to-reach areas. 3. Immerse the devices in cleaning solution inside an ultrasonic bath. While immersed in solution, brush the devices for 2 minutes using a soft-bristled brush. Special attention should be given to lumens, joints, crevices, and other hard-to-reach areas. Lumens should be brushed with appropriate diameter and length bristle sizes for the particular lumen. Actuate movable parts at least (5) times during soaking, as applicable. 4. After brushing, turn on ultrasonic power and soak and sonicate for 10 minutes at a minimum of 40±5 kHz. Ensure devices are in the open position and that lumens have complete contact with cleaning solution during soaking. 5. Remove the devices from the cleaning solution and rinse at least 1 minute with utility water. Thoroughly and aggressively rinse lumens, joints, crevices, and other hard-to-reach areas. 6. After the completion of preliminary cleaning, the end user has the option to perform either Manual Cleaning and Disinfection or Machine (Automated) Cleaning and Thermal Disinfection (preferred). IV. MACHINE (AUTOMATED) CLEANING AND THERMAL DISINFECTION Considerations for the selection of the washer-disinfector: • Capable of providing an approved program for thermal disinfection (appropriate exposure time and temperature according to A0 concept) • Final rinse completed with purified (critical, e.g. RO or DI) water and utilizes only filtered air for drying Cleaning Procedure: 1. After preliminary cleaning is complete, load the devices in the washer-disinfector such that all design features of the device are accessible to cleaning and such that design features that might retain liquid can drain (for example, hinges should be open and cannulations/holes positioned to drain). 2. If using alkaline cleaning agents, a neutralization step should be utilized as appropriate. 3. Run an automated wash cycle with fundamentally approved efficiency of the washer-disinfector (for example, CE marking according to EN ISO 15883 or FDA approval/ clearance/registration). The following minimum recommended wash cycle parameters were utilized by Arthrex during the validation of these instructions.

Minimum 6 Minutes or until visibly dry

E. INSPECTION AND MAINTENANCE 1. Arthrex non-sterile devices are precision medical devices and must be used and handled with care. Inspect the devices for damage prior to use, and at all stages of handling thereafter. If damage is detected, do not use the device prior to consulting the manufacturer for guidance. 2. Devices with cutting functions or sharp points become dull with continuous use. This condition does not indicate a device defect. This condition indicates normal wear. Dull devices may require replacement, if they no longer perform as designed. Inspection prior to use should include verifying the cutting ability and sharpness of these points and edges. 3. To protect instruments from staining and rusting, lubricate all moving parts prior to packaging and sterilization with an instrument lubricant that is biocompatible and has given compatibility with steam sterilization up to 138°C (280°F). Apply lubricants in accordance with manufacturer’s instructions. Re-lubrication is critical for devices that contain actuating mechanisms (e.g. ratcheting handles) to ensure continued effective operation.

containers with perforated bottoms and lids are approved for use with Arthrex, Inc. sets. Areas, or bracketed positions, designated for specific devices shall contain only devices intended for those areas. Devices should not be stacked or placed in close contact. Only Arthrex devices should be included in the trays or cases. These validated instructions are not applicable to trays or cases that include devices not intended to be used with Arthrex trays or cases. II. STERILIZATION Local or national specifications should be followed where steam sterilization requirements are stricter or more conservative than those listed in the table below. Sterilizers vary in design and performance characteristics. Cycle parameters and the load configuration should always be verified against the sterilizer manufacturer’s instructions.

1Drying times vary according to load size and should be increased for larger loads. 2Cooling times vary according to the sterilizer used, device design, temperature and humidity of ambient environment, and type of packaging used. Cooling process should comply with ANSI/AAMI ST79. 3Reprocessing parameters recommended by the World Health Organization (WHO) where there is concern regarding TSE/CJD contamination. III. SPECIAL PRECAUTION – TRANSMIS SIBLE SPONGIFORM ENCEPHALOPATHY AGENTS It is outside the scope of this document to describe in detail the precautions that should be taken for Transmissible Spongiform Encephalopathy (TSE) Agents. The agents for transmission of Creutzfeldt-Jakob disease (CJD) are believed to be resistant to normal processes of disinfection and sterilization and therefore the normal processing methods of decontamination and sterilization as described above may not be appropriate where CJD transmission is a risk. In general, the tissues that come into contact with orthopedic surgical instruments are those of low TSE infectivity. However, particular precautions should be taken when handling instruments that have been used on known, suspected, or at-risk patients. Refer to ANSI/AAMI ST79 for further information.

G. PACKAGING AND LABELING 1. Arthrex devices should be accepted only if the factory pack- aging and labeling arrive intact. 2. Contact Customer Service if the package has been opened or altered. 3. All of the symbols used on the labeling along with the title, description and standard designation number may be found on our website at www.arthrex.com/symbolsglossary.

H. STORAGE Sterile devices must be stored in the original unopened packaging, away from moisture and should not be used after the expiration date. Non-sterile metal devices should be stored in a clean, dry environment. The shelf life of non-sterile devices is not limited; the devices are manufactured from non-degradable material, which does not raise any question of device stability when stored under recommended conditions. It is the responsibility of the end-user to ensure devices, once sterilized, are stored in such a way as to maintain the sterility of the device until use. Sterile, packaged devices should be stored in a designated, limited access area that is well ventilated and provides protection from dust, moisture, insects, and temperature/humidity extremes. Sterile device packages should be carefully examined prior to opening to ensure that package integrity has not been compromised. Maintenance of sterile package integrity is generally event related. If a sterile wrap is torn, shows any evidence of tampering, or has been exposed to moisture, the device or set must be cleaned, repackaged, and sterilized.

I. CAUTIONS 1. Users of this device are encouraged to contact their Arthrex representatives if, in their professional judgment, they require a more comprehensive surgical technique or more information. Arthrex provides detailed surgical techniques in print, video, and electronic formats. The Arthrex website also provides detailed surgical technique information and demonstrations. 2. To avoid damaging the instruments, do not impact or subject to blunt force any instruments that are designed to be turned or screwed in. When two devices are intended to be threaded together, ensure that they are fully engaged prior to use. 3. Do not use Arthrex instruments for any purpose other than their intended use. Manipulating soft tissue or bone with an instrument not intended for that use may result in damage to the instrument. 4. Instruments with adjustable components must be handled with care. Overtightening or rough handling of the instrument may damage the locking mechanism. Locking mechanisms with internal polymer components may become weakened after repeated autoclaving. 5. Do not use an instrument that is intended to be used with a specific implant on another implant. 6. Flexion of the joint with the instrument in position in the joint may result in bending or breakage of the instrument. 7. Do not overstress the device or use device to pry tissue. I. INSTRUMENT-SPECIFIC CAUTIONS • Depth Guides: When noted on the depth guide, dis- assemble the device into components prior to cleaning, disinfection, and sterilization. • Staple Driver: Do not use the end of the Staple Driver’s jaws to seat the staple. This will result in the jaws breaking or bending. Do not use a mallet to strike the end cap of the Staple Driver. • Radiolucent Retractors: Use only to retract soft tissue. Do not use as a shield to protect soft tissue from saw blade, osteotome, and/or other surgical instruments.

J. WARNINGS 1. Caution: Federal law restricts this device to sale by or on the order of a physician. 2. After insertion of the instrument into the joint, do not apply additional flexion to the joint. A piece of a broken instrument can become lodged in soft tissue and/or disappear from the arthroscopic view of the surgical field resulting in possible fragments being retained in the patient. 3. Procedures carried out using these devices may be used on the general population. 4. The clinical benefits associated with the use of these devices outweigh the known clinical risks. 5. There are no unacceptable residual risks or uncertainties associated with the clinical use of these devices. 6. This device is intended to be used by a trained medical professional. 7. Follow your institutions policy for safe disposal of all needles and other sharps or medical waste. 8. Biohazard waste, such as explanted devices, needles and contaminated surgical equipment, should be safely disposed of in accordance with the institutions policy. 9. Serious incidents should be reported to Arthrex Inc., or an in-country representative, and to the health authority where the incident occurred.