Compression Screws Directions for Use 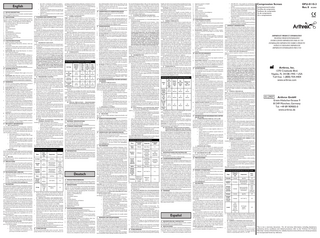 • ISO 17665-1: Sterilization of health care products – Moist heat – Part 1: Requirements for the development, validation, and routine control of a sterilization process for medical devices • AAMI TIR30: A compendium of processes, materials, test methods, and acceptance criteria for cleaning reusable medical devices • AAMI ST77: Containment devices for reusable medical device sterilization J. CLEANING AND DISINFECTION Certain Arthrex devices that may be used during this procedure are provided non-sterile and must be adequately cleaned and sterilized prior to use or re-use. All devices are to be cleaned, disinfected, and sterilized prior to each application; this is required as well for the first use after delivery of the unsterile devices. An effective cleaning and disinfection is an indispensable requirement for an effective sterilization of the devices. Single-use devices must be cleaned separately from soiled devices. If possible, the Machine procedure (Washer-Disinfector) should be used for cleaning and disinfection of the instruments. The Manual Cleaning procedure should only be used if an automated procedure is not available; in this case, the significantly lower efficiency and reproducibility of the manual procedure should be considered. The Preliminary Cleaning steps are to be performed in both cases. Manual cleaning may require onsite validation by the healthcare facility and appropriate procedures should be in place to avoid human factor variability. I. DETERGENT SELECTION Consider the following points during selection of the cleaning detergent: 1. Suitability of the cleaning agent for ultrasonic cleaning (no foam development). 2. Compatibility of the cleaning agent with the instruments. Arthrex recommends the use of neutral pH or enzymatic cleaning agents. Alkaline agents may be used to clean devices in countries where required by law or local ordinance, or where prion diseases such as Transmissible Spongiform Encephalopathy (TSE) or Creutzfeldt - Jakob disease (CJD) are a concern. Caution: Low acid or alkaline solutions are not recommended, as they corrode metal parts and anodized aluminum and compromise polymer plastics, such as FEP (Fluorinatedethylenepropylene), ABS (Acrylonitrile Butadiene Styrene), UltemTM, LexanTM, and CycolacTM. If non-neutral pH cleaning chemistries are utilized, care should be taken to ensure appropriate rinsing, as validated by the end-user facility, and neutralization steps are taken so as to not negatively impact the fit, finish, or function of the device. Follow the instructions of the detergent manufacturer regarding use concentration and temperature for either manual or automated cleaning. Use only freshly prepared solutions as well as only purified/ highly purified water at least for final rinse, and a soft, low-linting cloth and/or filtered medical grade air for drying, respectively. II. PRELIMINARY CLEANING Note: No assembly/disassembly of these devices is required unless stated on the labeling, directions for use, or literature assembly instructions (LAI) pertaining to cleaning, disinfection, and sterilization. Devices that require disassembly are to be disassembled prior to cleaning. 1. Remove excess soil from devices, especially in areas such as joints and crevices, by cleaning the surfaces with a sponge or brush under cold running water or with a non-shedding disposable wipe for a minimum of 30 seconds. 2. Rinse the devices at least 1 minute under running utility water (temperature < 35 °C/95 °F). Special attention should be given to lumens, joint, crevices, and other hard-to-reach areas. 3. Immerse the devices in cleaning solution inside an ultrasonic bath. While immersed in solution, brush the devices for 1 minute using a soft-bristled brush. Special attention should be given to lumens, joints, crevices, and other hard-to-reach areas. Lumens should be brushed with appropriate diameter and length bristle sizes for the particular lumen. Actuate movable parts at least (5) times during soaking, as applicable. 4. After brushing, turn on ultrasonic power and soak and sonicate for 10 minutes at a minimum of 40±5 kHz. Ensure devices are in the open position and that lumens have complete contact with cleaning solution during soaking. 5. Remove the devices from the cleaning solution and rinse at least 1 minute with utility water. Thoroughly and aggressively rinse lumens, joints, crevices, and other hard-to-reach areas. 6. After the completion of preliminary cleaning, the end user has the option to perform either Manual Cleaning and Disinfection or Machine (Automated) Cleaning and Thermal Disinfection (preferred). III. MACHINE (AUTOMATED) CLEANING AND THERMAL DISINFECTION Considerations for the selection of the washer-disinfector: • Capable of providing an approved program for thermal disinfection (appropriate exposure time and temperature according to A concept) 0 • Final rinse completed with purified (critical, e.g. RO or DI) water, and utilizes only filtered air for drying 1. After preliminary cleaning is complete, load the devices in the washer-disinfector such that all design features of the device are accessible to cleaning and such that design features that might retain liquid can drain (for example, hinges should be open and cannulations/holes positioned to drain). 2. If using alkaline cleaning agents, a neutralization step should be utilized as appropriate. 3. Run an automated wash cycle with fundamentally approved efficiency of the washer-disinfector (for example, CE marking according to EN ISO 15883 or FDA approval/clearance/registration). The following minimum recommended wash cycle parameters were utilized by Arthrex during the validation of these instructions.

6 Minutes or until visibly

K. STERILIZATION This device may be provided either sterile or non-sterile. Check the package labeling for more information. For the devices that are not

1Drying times vary according to load size and should be increased for larger loads. 2Cooling times vary according to the sterilizer used, device design, temperature and humidity of ambient environment, and type of packaging used. Cooling process should comply with AAMI ST79. 3Reprocessing parameters recommended by the World Health Organization (WHO) where there is concern regarding TSE/CJD contamination. Note: Immediate-use (flash) steam sterilization should only be used as an emergency procedure. Refer to AAMI ST79 for further instructions and limitations. III. SPECIAL PRECAUTION – TRANSMISSIBLE SPONGIFORM ENCEPHALOPATHY AGENTS It is outside the scope of this document to describe in detail the precautions that should be taken for Transmissible Spongiform Encephalopathy Agents. The agents for transmission of Creutzfeldt-Jakob disease are believed to be resistant to normal processes of disinfection and sterilization and therefore the normal processing methods of decontamination and sterilization as described above may not be appropriate where CJD transmission is a risk. In general, the tissues that come into contact with orthopedic surgical instruments are those of low TSE infectivity. However, particular precautions should be taken when handling instruments that have been used on known, suspected, or at-risk patients. Refer to AAMI ST79 for further information.

L. MATERIAL SPECIFICATIONS Refer to the package label for the materials. This device is made of Poly (L-Lactide), or titanium.

M. STORAGE CONDITIONS Sterile devices must be stored in the original unopened packaging, away from moisture and should not be used after the expiration date. Non-sterile metal devices should be stored in a clean, dry environment. The shelf life of non-sterile devices is not limited; the devices are manufactured from non-degradable material, which does not raise any question of device stability when stored under recommended conditions. It is the responsibility of the end-user to ensure devices, once sterilized, are stored in such a way as to maintain the sterility of the instrument until use. Sterile, packaged devices should be stored in a designated, limited access area that is well ventilated and provides protection from dust, moisture, insects, and temperature/humidity extremes. Sterile device packages should be carefully examined prior to opening to ensure that package integrity has not been compromised. Maintenance of sterile package integrity is generally event related. If a sterile wrap is torn, shows any evidence of tampering, or has been exposed to moisture, the device or set must be cleaned, repackaged, and sterilized.