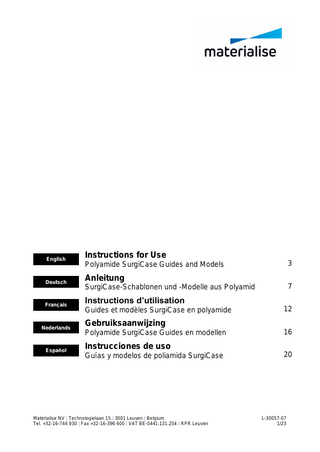 Instructions for Use Polyamide SurgiCase Guides and Models

Instructions for Use Polyamide SurgiCase Guides and Models

This document contains general instructions for use for Polyamide SurgiCase Guides and Models. For case-specific instructions, refer to the Case Report (planning report). DESCRIPTION SurgiCase Guides and Models are custom-made devices per European definition, designed to fit, or represent, the patient’s anatomy. They are intended for improving and simplifying the performance of surgical interventions in orthopaedic procedures. INDICATIONS FOR USE The SurgiCase Orthopaedics system is intended to be used as a surgical instrument to assist in pre-operative planning and/or in guiding the marking of bone and/or guide surgical instruments in non-acute upper and lower extremity orthopedic surgical procedures. SurgiCase Guides are intended for single use only. MATERIAL Polyamide. CONTRAINDICATIONS Do not use in the case of active infection of the surgical area where the surgery will be performed. WARNING  The user should be aware of possible allergic reactions to materials used in the guide or model. The patient should be informed of this matter by the user.  These are patient-specific, single-use, disposable guides and models.  Do not attempt to reuse or recondition the guides or models.  Do not alter the guides or models in any way.  SurgiCase Guides are to be used by a trained physician in the performance of surgery.  Be aware that these patient-specific guides and models have been manufactured based on CT/MRI scans of the patient. If the patient’s anatomy has changed significantly since the time of the CT/MRI scan, the guides or models should not be used.  The guides and models should be properly cleaned before sterilization. Do not use the guides if they are broken, cracked, or are visibly contaminated, or if the stainless steel tubes (if present) are not tightly secured;  The guides and models in this package are provided non-sterile. The guides and models in this package must be sterilized prior to use.  The bone model can no longer be used if it is dropped. PRECAUTIONS  It is advised to use the guide or model within 6 months after performing the CT/MRI scans on which they are based. If the patient’s anatomy has changed significantly since the time of the CT/MRI-scan, the guide or model should not be used, even if the time period of 6 months has not expired.  Do not apply excessive force on the guides or place heavy objects on top of them.  Markings on guides, used for indicating anatomical references and case information, must be legible. These include lines indicating anatomical directions, and identifiers with case information, such as case identifiers (see below). Notify your Materialise representative if the markings are not legible or if the identifiers do not correspond to the intended patient or surgeon. PATIENT-SPECIFIC GUIDE IDENTIFIERS An identifier is indicated on each guide and model. This alphanumeric code links the guide unambiguously to the patient case. Each patient case is accompanied with a Content of the Box form and a Case Report, which specify all delivered surgical instruments, together with their identifier and a graphical preview.

Before using the guide, check the identifier for readability and confirm that it corresponds with the patient’s identity. If the guide contains an external tag with the identifier, this tag needs to be removed before coming in contact with the patient. POSSIBLE ADVERSE EFFECTS Infection following the surgical procedure. Introduction of foreign materials can result in an inflammatory response or allergic reaction. INSTRUCTIONS FOR USE Fitting of the guide  The guide is designed to fit the patient anatomy. The supporting surface (bone, cartilage) should be completely freed to assure good fit of the guide.  Take enough time to fit the guide on the patient. The Case Report shipped with every guide indicates the position of the guide relative to the surrounding anatomy. An outline/marking of the guide fit is also present on the bone models that are shipped together with the guides. Try different positions and check whether or not the guide stays in place. Choose the most stable position, i.e., the position in which the least pressure must be exerted in order to keep the guide in place. Do not push the guide down too hard. Make sure critical anatomical structures are not damaged during fitting. Materialise always sends the anatomical models together with the guides. As such, fitting the guide can be tried on the anatomical models before surgery.  When a stable position for the guide is obtained, fixate the guide by means of fixation pins (if present). Make sure fixation holes are correctly identified. Refer to the Case Report to know which holes are for fixing purposes.  If it is not possible to place the guide on the patient in a stable position, then the guide does not guarantee an accurate transfer of the pre-operative planning.  Even in a stable position it is possible that the guide does not make contact with the bone over its full length, since it is not always possible to solve all of the undercuts. The undercuts depend on the shape of the patient’s anatomy. During the design of the guide the amount of undercut is kept to a minimum in order to ensure a maximal contact between the fitting surface and guide.  Do not alter the guide before use. Small particles might come off, which could contaminate the operating region. In addition, altering the size of the guide may lead to it no longer fitting to the patient’s anatomy. Therefore, it is the total responsibility of the user when altering the guide before surgery. During cutting and drilling  Make sure the guide maintains its position on the fitting surface during cutting and/or drilling.  During cutting (sawing), irrigate to reduce heat and any debris generated.  Do not attempt to drill through the guide without using the correct metal drill sleeve mentioned in the Case Report shipped together with the guides.  Do not use a saw blade with a different thickness than the one indicated in the Case Report shipped together with the guides.  Make sure the sawblade follows the cutting slot to obtain a correct osteotomy and to avoid cutting into the guide.

SurgiCase Guides and Models are NOT STERILE and must be thoroughly cleaned and sterilized prior to use.

CLEANING Whenever possible, a washer/disinfector (according to ISO 15883) and ultrasonic cleaning equipment should be used to clean the guides and models. The detergents and/or enzymatic cleaner should have a pH value in the range pH 7-11. The guides and models can be cleaned using manual cleaning and/or automated cleaning in a washer/disinfector with manual pre-cleaning and ultrasonic cleaning.

Automated cleaning in a washer/disinfector

Before the cleaned products are packaged and sterilized, carefully examine them to see if they are clean and undamaged.

STERILIZATION Recommended sterilization specifications The guides can be sterilized up to two (2) times prior to use. The guides are intended for single use only. Users should conduct testing in the health care facility to ensure that conditions essential to sterilization can be achieved.

Use one of the following standard steam sterilization settings:

CONTACT DETAILS For any questions or concerns, please contact your Materialise representative and/or the Materialise customer service. Comments or changes regarding the use of this device can be directed to attention of the manufacturer: Materialise N.V., Technologielaan 15, B-3001 Leuven, Belgium, Tel: +32-16-744 930, Fax: +32-16-396 600. Authorized Representative Malaysia: Materialise Sdn Bhd, Unit 5-01, Menara OBYU,No. 4, Jalan PJU 8/8A, Damansara Perdana, Petaling Jaya, 47820, Selangor

1 Minimum validated steam sterilization time required to achieve a 10-6 sterility assurance level (SAL). 2 In the case local or national specifications for steam sterilization requirements are stricter or more conservative than those listed in this table, please contact Materialise before sterilizing and using the guides. 3 Disinfection/steam sterilization parameters recommended by the World Health Organization (WHO) for reprocessing instruments where there is concern regarding TSE/CJD contamination.